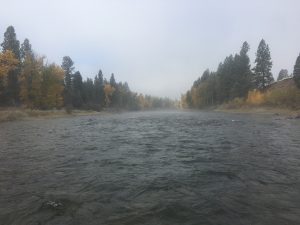 Those 60 degree sunny days have pretty much said goodbye. We’ve moved into that winter transition where its overcast/raining, with much shorter windows of opportunity. Doesn’t mean its not happening, just no reason to be out there too early. Blackfoot has some cool water temps and fishes best from about 1-4 pm. Mostly BWO’s and October caddis nymphs along with slower moving streamers. Having the correct pattern can make ALL the difference. Your best bet with the O Caddis nymph is to invent your own. Haven’t found a pattern on a shelf that seem to produce consistently.
The Root window is a little bigger 11-4 is when you want to be there. At times and in certain stretches the fish can be extremely selective. The correct stage of your BWO is imperative. You may pick up one but then it’s done otherwise. Pretty much a Mayfly deal down there even in the sun. But a chubby with the right nymph will keep you bent. Still a fair amount of traffic on the weekends.
Upper Clark is fishing with streamers. Though oddly enough the fish are in the faster stuff at the head of the runs. Timing can be a little strange up there too. Sometimes early in the day can be you best shots.

The Word on the River...

Clear Creek Outfitters
Doug,
Thanks for a great time on the river…Dillan and Aron were great…and the bbq lunch was fantastic! Debbie enjoyed the spa and really appreciated the discount … We are looking forward to getting back in October…see you then.
Rod Neighbors